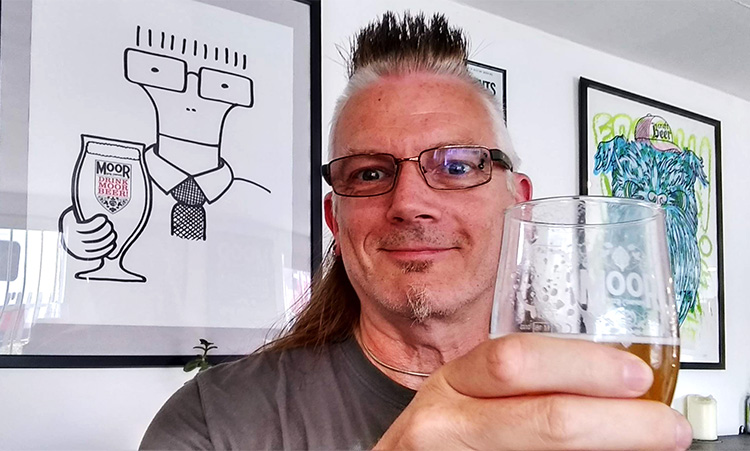 My earliest recollection of tasting beer was in the kid’s outside area of a pub, somewhere on the outskirts of Portsmouth, when I asked my dad if I could taste his beer. I took a swig and my face screwed up immediately as the bitter brown liquid hit my taste buds. “Don’t worry”, said my dad. “You’ll get used to it!” …and get used to it I did! That story is the first memory I have about my beer-drinking career but there have been many memory-making milestones along the way. Some of them are quite hazy now – the memories that is, not the beer (although many of them have been), but I’ll try to retrieve them for this article.

The first ‘proper pint’ I ever had – that is bought for myself with my (pocket) money – was at the age of fourteen in the Railway Club in Newark. My Grandad used to take me there every Saturday evening and if I was quiet, I was allowed to sit in the corner with a brown ale whilst he and his mates played dominoes. One time I asked if I could have a beer and my Grandad said, “You’re a man now, go and buy your own.” I sidled up cautiously to the bar with my hand on the loose change in my pocket wondering if a) I’d get served and b) I had enough money. I waited my turn and asked for a pint of Forest Brown. The pint was placed in front of me and I was asked for the princely sum of… 11½p! Now, almost half a century later, I shudder to think how much money I’ve spent on beer, but consider it’s been worth every penny.

The second price-related milestone was the price increase of Kimberley Best Bitter when it went up from 20 to 22p a pint in the Old Kings Arms in Newark, c.1978ish. “Ridiculous!” we all cried. “You can’t get five pints for a pound any more. Boycott!!!” It hasn’t all been about price of course (more on that in a later article), but mostly how the availability of quality beer and, in particular, beer styles have changed over the years.

In the first twenty years of my journey with beer, most pubs were limited to ‘Bitter’ or ‘Mild’. If you were REALLY lucky, you may have may have found the occasional IPA or stout. Sometimes, if you wanted a bit of variety, you could mix the two and order an ‘alf and alf’ – half bitter/half mild mix. I wouldn’t recommend it. The brewery choice out there was very limited too, certainly in my neck of the woods. I remember stumbling into a pub in Suffolk once with some friends and finding Tolly Cobbold on the bar. We all thought it must be Christmas! How laughable that is now, but back in the day that was the reality.

I’m not sure when the really pale beers started to become more popular, but my first experience was Boddington’s which, although not pale by today’s standards was, compared to most of the other beers at the time. I first tasted Boddies in a pub situated just yards from the brewery in Manchester sometime in the 1980’s and the beer had a lasting impression on me. Again, nothing to write home about now, but at the time it was delicious. When the first straw-coloured pales started coming through, e.g. Exmoor Gold, the whole beerscape began to change and brewers started experimenting with new-generation, new-world, imported hops. A whole new world of flavours had opened up, and I was going to be part of it!

I often hear people in pubs (mainly older generation, to be fair) bemoaning the fact that you can’t get ‘normal’ beer any more. By ‘normal’ they mean traditional, old-fashioned brown bitter. And it’s a fact, they are actually harder to come by on bars across the country. Now, whether the Nation’s palates have actually changed, or if the hoppier, paler beers have been forced on us, it’s hard to tell. I suspect it’s a bit of both, but the fact is that ‘pale and hoppy’ sells! The focus of hoppy beers is, of course, hops. Whereas the traditional English bitters were made with predominantly English hops, modern beers use hops of which there are literally dozens of varieties (more here)  from all over the world. On my journey, there have been a few game-changers.

Citra.
Citra was, in my view, the hop that started off the craze for citrussy pale beers. The Citra hop, as inferred in its name, has been called the ‘most citrusy aroma hop in the world of beer’. Its characteristics of citrus, grapefruit, lime and tropical fruits, along with a harsh bitterness, changed the brewing game forever and some of the early beers that used it – such as Oakham Citra – changed drinker’s palates too. Things would never be the same.

Sorachi Ace.
When you’ve been drinking beer for forty-odd years, I think you might be confident that you’d tasted everything it has to offer. Wrong! The first time I tried this astounding hop was an Acorn Brewery Sorachi Ace IPA and it was one of those WOW! moments. Sorachi imparts intense lemon flavour and aroma, as well as dill, tea, coconut and coriander notes and is literally light years away in flavour from (most*) other hops. That first pint of Sorachi IPA tasted like liquid lemon cheesecake. Exquisite! The other unforgettable beer I’ve had that uses this hop is Marble’s Little Meiko. Superb! *At risk of becoming geeky, there are, to my knowledge, two other hops that have Sorachi-like qualities, the memorably named HBC 472 and HBC 438 ‘Sabro’ experimental varieties.

Mosaic.
Another excellent hop that changed my tastes in beer is the Mosaic. Its main characteristic is its blueberry aroma, but others include mango, stone fruit and bubble gum. It gives a beautiful mellow creaminess to the beer and distinctively stands out from other hops.

That’s enough about boring old hops. There has been an astonishing surge in the varieties and styles of beers available these days. We are truly experiencing a golden age of beer, have no doubt. Let me tell you about some of the styles that rocked my world…

Lambics/sours
Lambic is probably the oldest beer style in the world, and a style embraced by the Belgians. Lambic is brewed then fermented in shallow ‘coolships’ that are left open to the elements and spontaneously ferment from wild spores from the atmosphere to create the most acidic, face-puckeringly sour and dry beers on the planet. The inconsistency of the brews caused by wild fermentation are tempered by careful blending of one, two, and three year-old brews to create a consistent product. These beers are called gueuze and are some of the finest (in my opinion) examples of the brewer’s art.

A new generation of sour beers started just a few years ago, but instead of using the traditional spontaneous fermentation, they use a technique called ‘kettle souring’. This involves introducing lactobacillus into the brew, which can sour the brew in a matter of days, rather than months or years. The early versions of these beers were pretty poor in my view, but they have improved enormously over the last couple of years and are proving enormously popular. If you haven’t tried out the world of sour, what are you waiting for?

Black IPA.
BLACK India PALE Ale? Impossible? No, it’s a thing! Basically BIPA (sometimes called Cascadian Dark) is a traditionally brewed stout that is then charged up with citrus hops as an IPA would be, giving the roast of a stout with the hoppiness of an IPA. It works, and the first time I tasted this style really left an impression.

Craft cans.
Cans are shite, right? Wrong! That certainly used to be the case (and, to be fair, probably still is with a lot of mass supermarket rubbish) but the new-generation beers from cans are fresh, tasty and immensely practical.

New England IPA.
NEIPA is probably the last big style to emerge from the States and has caught on big in the UK. New England IPAs originated in East-coast USA and is the style personified by breweries such as Trillium in Boston. NEIPAs feature an intense, tropical fruit-centric, hop aroma and flavour. It’s heavily dry hopped to the point of being hazy and has a fuller body, smoother flavour, and less bitter than a typical IPA. Some even have pureed fruit added, giving the beer a thick and creamy, easy-drinking texture. It is easily my favourite style of the moment.

So there you have it. Some highlights of my journey with beer. Lock those doors, I’m not getting off the bus any time soon. It’s hard to imagine what the beer scene will look like in only ten years’ time. Over the last four or five decades we have seen the collapse of the National brewer’s stranglehold on the industry. The Beer orders inadvertently changed the face of the pub industry forever, and whilst some pubs are struggling, the best are thriving. Independent brewers have flourished in the last couple of decades since progressive beer duty was introduced. Now, we are on the crest of the Craft Beer Tsunami with young and talented brewers producing fantastic, flavoursome, innovative beers all over the country.

Beer drinkers have, without a shadow of doubt, never had it so good. Some folks complain about the price of beer, but the fact is (quality) beer IS still value for money, and I will attempt to address that in my next article. Make the best of it while it lasts! Support your pubs or they will be gone forever.

Please let us know your milestone beer memories in the comments below – We’d love to hear them!