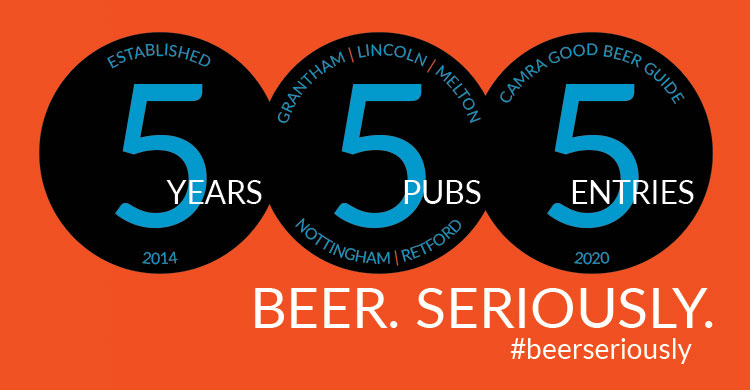 BeerHeadZ was founded just five years ago in Retford and have expanded rapidly; opening pubs in Grantham, Nottingham, Lincoln and Melton Mowbray, five in total. BeerHeadZ has developed a sound reputation for quality and exciting beer and the brand is now instantly recognised by beer lovers around the East Midlands.

The Good Beer Guide, now in its 47th edition, is produced annually by CAMRA (The Campaign for Real Ale) and features 4,500 UK pubs serving the best quality beer. It is compiled by an army of unpaid volunteers who anonymously inspect the Nation’s pubs to produce a list of the few that make it into the Guide, which is widely referred to as ‘The Drinker’s Bible’. It is the go-to resource for all discerning beer drinkers.

To celebrate the milestone of ‘five years, five pubs, five entries’, BeerHeadZ have commissioned a beer called ’555’ which will be brewed by the pub managers under the careful guidance of Dean Baker of Baker’s Dozen Brewery in Ketton. The one-off beer will then be available only in BeerHeadZ and a few other selected pubs for a limited period.

Martin Johnson, Operations Director of BeerHeadZ said: “Many beer drinkers enjoy trying and tasting new beers, and we hope they enjoy adding ‘555’ to their list. They’d better be quick though, because it won’t be around for long”.

Phil Ayling, BeerHeadZ Founder and Director, said “The quality of our beer offer has always been our focus and BeerHeadZ’ strapline ‘BEER. SERIOUSLY.’ has now been confirmed by the inclusion of all five of our pubs in the CAMRA Good Beer Guide 2020. Thanks to every member of our hard-working teams that have made this possible”.