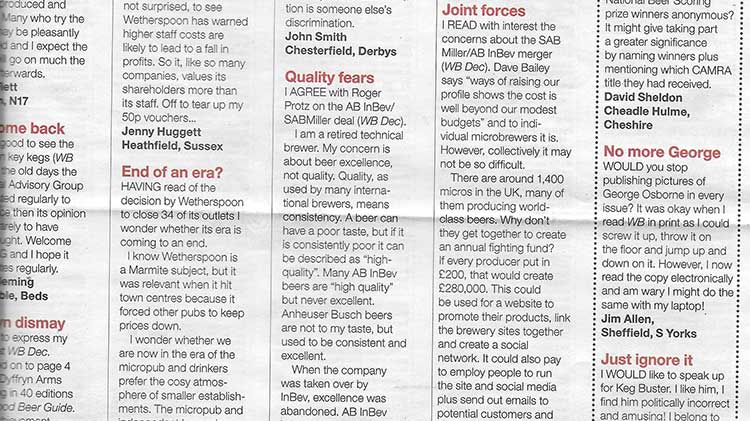 BeerHeadZ Phil has had a letter published in the latest issue (Jan 2016) of the CAMRA newspaper What’s Brewing, commenting on the threat created by the recent mega-merger of SABMiller and AB InBev to the many much smaller brewers and micro’s in this country (and indeed worldwide).

The chaos has already started. For example, the acquisition of London’s Meantime Brewing by SABMiller a mere seven months ago, only to be put up for sale again to comply with European regulations because of AB InBev’s recent buy-out of the nearby Camden Town Brewery. Such tactics show the callous way in which these mega-corporations conduct business. It happens. That’s big business. But our thriving and exciting brewing industry should be protecting themselves. They need to formulate counter tactics now.

I don’t know the answers, but I do know that brewers and suppliers should be talking to each other about it.

As usual, the original letter  to What’s Brewing was heavily edited and lost some of its original intention. Therefore it is published in its entirety here.

I read with interest the articles by Roger Protz and Dave Bailey (p.9 and back page respectively, WB December) regarding concerns about the SABMiller/AB InBev merger. Half way through Dave’s article he says that “ways of raising our profile shows the cost is well beyond our modest budgets” and of course, to individual micro-brewers it is. However, collectively it may not be so difficult.

I have thought about this for a long time and wondered why, when the great brewing nations such as Belgium, Germany and the Czech Republic seem to shout from the roof tops to the World about how great they are at brewing, our industry (with the exception of the national brands) remains largely unsung.

There are currently around 1400 independent micros in the UK, many of them producing exciting and innovative world-class beers. Why don’t they all get together to create an annual ‘fighting fund’? If every producer put a modest £200 (about the price of one full-page ad in a local CAMRA newsletter) into a central pot, that would create £280,000. £500 would generate considerably more. This could be used to set up a collective website to promote their products, link all the brewery websites together and create a social network between brewers.

It could also pay to employ one or two people full-time to run the site, manipulate social media on behalf of the brewers, create a monthly e-newsletter and send out e-mailshots to potential customers and distributors. I suspect there would even be enough money to create posters, flyers and displays which breweries could then send out with their products for display in offies and supermarkets.

I agree with Dave that individually brewers will have no answer to the might of SAB/InBev (or whatever they will be called), but as a collective, they might just have a small chance of holding their own. It may be that I have a naïve view of the industry and expecting people to work together, but it must be worth a shot at?